What parts of the world can see the lunar eclipse?

The eclipse will be visible from a large section of land masses across Earth. The diagram below provided by NASA illustrates what continents and countries can witness the event

The eclipse on September 28th will be total. This means that the Earth will pass completely infront of the Sun as viewed from the Moon. For us here on Earth, the Moon pass directly in to the Earth’s shadow or ‘Umbra’. The moon will slowly turn from pearly white to a reddish colour then back to its original colour all over a period of around five hours (start to finish). The shade of red can vary from eclipse to eclipse depending on conditions in the Earth’s upper atmosphere. If there have been any significant volcanic eruptions for example, this can cause the eclipsed moon to appear a much darker red than of other eclipses. The added amount of volcanic ash and dust in the Earth’s atmosphere can block more of the Sun’s light from refracting around the Earth during the eclipse causing deep, dark red effects. It’s hard to predict with certainty how red this eclipse will be. It’s best to wait and see and enjoy any surprises that this eclipse may reveal. During totality, many more stars can be seen than what could be seen during the full moon. Its a good photographic opportunity for a widefield shot of the eclipsed moon complimented by a background of stars.

The diagram below shows that during this eclipse the moon will not be completely central but will definitely be in total phase for a decent amount of time (over one hour). So, as with most total lunar eclipses, there is no need to rush out to view it as the whole process is gradual unlike solar eclipses during their total phase. 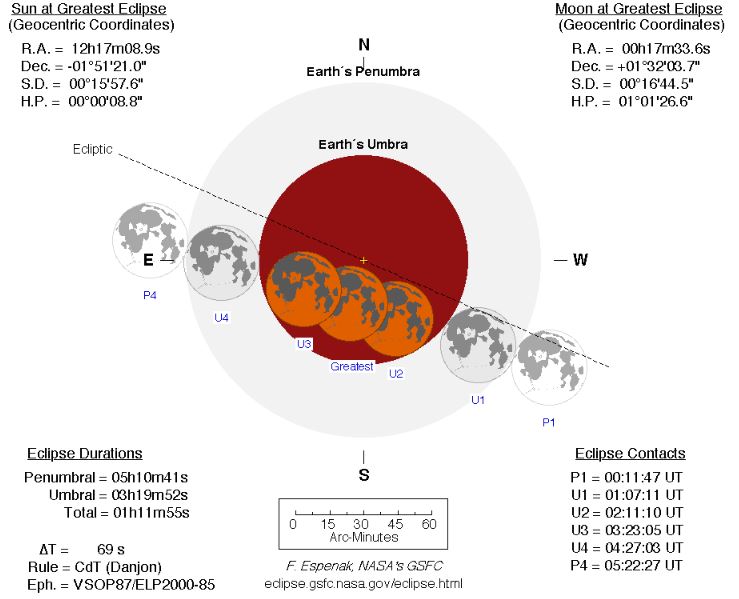